Check out this new novel by W.B. Kinnette!! 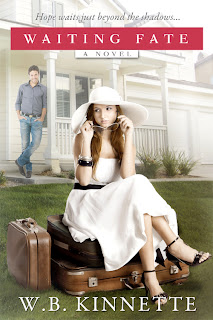 As he walked her to her door, she slid her small fingers into his, and he ran his thumb across the back of her hand. The night was cool. At the door she turned, smiling up at him. “Thank you Archer. It was… fun.”
He couldn’t see clearly, but he could swear she was smirking. Yeah, you blew your chance. Way to go. So he hugged her, wrapping his arms around her waist, like he’d done a hundred other times before. They were a huggy group.
He was surprised when she rose on her toes and slid her arms around his neck, holding tight like he was a lifeline. He pulled back, just a bit, hoping but afraid to hope as he searched her eyes. They sparkled, just a bit, and then she leaned forward, closing the gap between them and brushing her lips against his.
Time stopped. The world stopped and he froze in shock. It took him several seconds to realize what was happening, and then he kissed her back, holding her tight against him. He could feel her heart racing, matching his. When she relinquished his lips, he sucked in a breath, struggling to breathe. “I’ve wanted to do that since high school,” he muttered, almost without realizing it.

W.B. Kinnette was born and raised in Utah, the baby of the family and spoiled rotten. She lived briefly in Texas and Alaska before coming back to raise her family only a few miles from her childhood home. She’s loved writing since she was small, because daydreams demand to be written down. She believes that dreams must be chased, if only so she can tell her children honestly that dreams do come true if you work hard enough – and never give up!

BACK COVER BLURB:
Sometimes Fate hides in plain sight while you stumble through darkness.

Ivy escapes from an abusive husband, finding peace with her daughter in her childhood home. She’s determined to keep her past a secret to protect those she loves.

Archer has been in love with the same girl since seventh grade. When Ivy comes back into his life—bruised, broken, and haunted by secrets—he knows he can’t lose her again.

But Ivy made a promise to her daughter. No one would hurt them again. She’s afraid to trust, afraid to be wrong again, and afraid that the one man she’s loved forever will break her heart.

Fate might take its time, but it won’t wait forever.


From the author:
First I have to say thank you so much, Sherry, for having me on your blog! I’m so excited to talk about the release of my novel, Waiting Fate. This story is dear to my heart because it’s based on the true story between my husband and I, and I kind of like him.

When my publisher had an open call for submissions for true love stories, I thought, “Oh! How fun will that be? I can totally do that!” Turns out, writing about real life is not as easy as making stuff up. My initial thought that it was all plotted out for me so it would be simple was way off. Having it all plotted out for me left me little room for creativity, and my brain, apparently, doesn’t like being told what to do.

Second, it was hard, because there were some memories that I didn’t really want to relive, and writing about them brought them right up to the surface to deal with all over again. And now that it’s published, it’s a little like leaving my journal out for everyone to read!

BUT. I still love this story, and I love sharing with the world how amazing my husband is. There’s that saying I see everywhere… “All love stories are beautiful, but I like ours the best.”