1. What is the one book everyone should read, in your opinion?
Definitely, Mrs. Mike by Nancy and Benedict Freedman
2. Goals for future projects/books?
I have three manuscripts that are nearly complete. I am currently in the process of editing a crime thriller that takes place in Seattle, Washington. Tarrin Grace has just come through a very difficult divorce, and just when things are beginning to look up, her young daughter, Lexie, is witness to a heinous murder. Suffering from a form of post-traumatic, Lexie is unable to recall details of the crime or the murderer. However the killer remembers her and Tarrin must risk all she has to protect her family.
3. Is there a song you could list as the theme song for your book or any of your characters?
Music is definitely the inspiration for my writing. I make playlists for each novel and I listen with headphones while I write. The Alias was inspired around the Transformers soundtrack, believe it or not. The pace and mood of the compositions matched the story and helped break up those awkward moments of writer’s block. When I needed to write a particular scene, I changed the song to match the emotion I wanted to portray.
4. Did you always want to be a writer? No...As a young child, I suffered from severe ADHD. I didn’t excel in school or in reading, and I was often placed in remedial classes to help me along. I hated school work. However, around the age of 11, I won a contest. The prize was a book written by Mary Downing Hahn titled Wait Till Helen Comes. One boring afternoon, with my mother’s encouragement, I sat down and read that book. I finished it in a few short hours. At that point, I realized words had the ability to hold my interest and calm my chaotic thought process. From that moment on, I read anything I could get my hands on, and by the time I reached 12, I knew I wanted to be a writer. I wrote my first full-length novel that year. The story line is weak and my writing is awful, but I’ve held onto that tattered manuscript. It means the world to me. The completion of that manuscript was a huge turning point in my life. I suddenly realized that I could succeed with hard work and determination. It was an uphill battle, but I turned my grades around, graduated high school with honors, and went to university with an academic scholarship. I still struggle to remain focused and retain facts and information, but writing is the one area in my life where I can channel my thoughts.
5. How do you react to a bad review?
I eat ice cream and pout. Then, after I’ve had my fill of self-pity, I get back to work and do the very best I can.
6. If you could co-write a book with ANY author, who would it be, and Why?
Jennie Hansen or Dorothy Keddington…While wandering aimlessly through my local library one afternoon, I happened to stumble across Return to Red Castle and Run Away Home. I checked both books out and I read into the night and throughout the next day. I couldn’t put either book down. It was at that point I knew what I wanted to write. I loved suspense.
7. How did you come up with the idea for The Alias?
What inspired you to write the Alias?

My story ideas usually come from a conglomeration of different events that touch my life. At the time, a close friend was pursuing a divorce where she had suffered some spousal abuse. I was struck by the amount of strength it would take to leave behind such a marriage and the amount of courage needed to build a new life. One of the main themes in The Alias is domestic violence. Jacey, the protagonist, is attempting to build a new life for her son after leaving behind an abusive and controlling husband. One reviewer said, “Having had some spousal abuse myself, the author handled the topic with a maturity I appreciated.” I’ve really tried to portray that quiet strength in this novel.


8. If you could go back in time to when you first began The Alias, is there anything you would tell yourself?

I would tell myself to stop being such a ninny and grow a backbone. I’ve been writing for years, but I was nervous to send my work into a publisher. I was terrified of being rejected. Criticism is a hard pill to swallow. But I wish I had sent The Alias in sooner. I wish I hadn’t allowed my fear of criticism to hold me back as long as it did.

MY REVIEW:
Jacey is a divorced mom who needs to escape her life, quickly. Her ex-Hubby, an abusive creep, has the FBI on his tail, and he also believes he deserves to have custody of their son, Blaze. Jacey assumes a "new" identity, and escapes to Utah with her son.

The story was intense, with action and suspense at every turn. The abuse by the Ex-hubby were real and heart-wrenching, making it difficult to read without crying.

The Alias was a great read and I enjoyed every last second of it!! First-time novelist Mandi Slack did a masterful job at telling a story on such a difficult subject. I can't wait to read more from her! Thanks, Mandi! 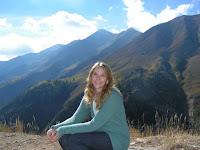