The Night Marchers Series by Rebecca Gober and Courtney Nuckels 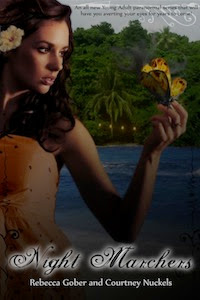 NEVER, EVER lock eyes with a Night Marcher! Everyone in Hawaii has heard this warning, except for seventeen-year-old Emma Townsend, that is. For most Hawaiians know that looking into the eyes of Night Marcher can strike a curse that will end in death or eternal servitude.

Even though her father, who is a paranormal investigator, solely raised Emma, she has little experience in the realm of the supernatural. When she is forced to move with her father to Hawaii, only months before her graduation, Emma finds that her world as she knows it, is shaken when she starts seeing the unexplainable: fire balls in the distance, beating drums in the middle of nowhere and strangers who vanish into thin air. Then one day when she has a run in with a procession of Night Marchers, ancient Hawaiian spirits wandering from their burial grounds to their locations of battles past, Emma has no choice but to believe that the unbelievable does exist.

Now Emma must go on the run with the help of a mysterious stranger, as they seek out how to free Emma from the curse of a Night Marcher, who will stop at nothing to get her soul.

Night Marchers has had more than 100,000 downloads since February 2012.
The Legend of the Night Marchers Guest Post
Source of article: http://www.to-hawaii.com/legends/night-marchers.php

Hawaii – Home of the Night Marchers

The Hawaiian Islands are notably one of the most spiritual vacation destinations. With a rich history of mythology and folklore and numerous sacred sites still standing, Hawaii’s link to the past is ever present. 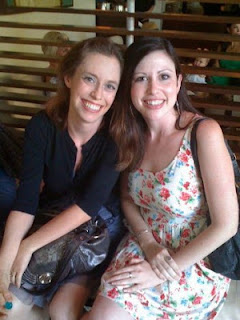 The retelling of spooky ghost tales has been a favorite form of entertainment and an important cultural link in Hawaii since ancient times. Ghostly images or haunting acts have been reported in old buildings, deep valleys, sacred burial sites, ancient temples called heiaus, forested areas, beaches and lava fields. A good majority of Hawaii residents have either had a spooky encounter at some point during their lives, or know of someone with an eerie story to tell. One of the most popular subjects of ghost stories in the islands is the Night Marchers, or Hukai-po.

Night Marchers are ghostly apparitions of a band of beings who move with purpose to the beat of primitive pounding drums. Some say they are armed spirit warriors en route to or from battle, toting archaic weaponry and clothed in decorated helmets and cloaks. Other accounts tell of high-ranking alii (ruler) spirits being guided to places of high importance or to welcome new warriors to join in battle. Perhaps these restless souls are looking to reclaim rightful territory, replay a battle gone awry, or avenge their own deaths. Some say the Night Marchers are searching methodically for an entrance into the next world.
Night Marchers are said to roam through very specific locations on the islands, between seashore and mountains and are often recognized by their raised torches and repeated olis, or chants. Although there have been a few scattered reports of daytime marches, these apparitions appear to be most active at night and are said to march on certain nights designated by the moon. And although the Night Marchers allegedly float a few inches off the ground, some local accounts tell of seeing mysterious footprints in their path after they’ve passed.

Areas like the Nuuanu Pali Lookout, Kaaawa Valley and Kalihi Valley on Oahu are rumored homes of Night Marcher trails, and nighttime visitors are encouraged to be wary.

What to do when happening upon a night march in progress? The ghostly procession must never be interrupted. Legend has it that resting your eyes upon the Night Marchers could signal a grim fate for the perpetrator, a friend or relative, so witnesses are urged to crouch low to the ground, “play dead” and avert the eyes. Any sound or movement could invite a Night Marcher’s deadly glance. These Night Marchers are set diligently upon their destination and are not considered spirits that will deviate from their path to haunt humans nearby.
.
Some characteristics of the mysterious night marches include:
•  Heavy wind
•  Rows of spirits carrying torches
•  Alternating male and female rows
•  Accompanying lightening and thunder
•  Accompanying heavy rain or high surf
•  Chanting and drumbeating
•  Unusually bright torches
•  Game playing and revelry
•  Accompanying mist or fog

About Rebecca Gober and Courtney Nuckels:

Rebecca and Courtney are downhome country girls powered by chocolate and other random late night cravings. Coined in southern twang they bring new meaning to the word y'all. BFI's since the 6th grade, with a knack for getting into sticky situations, has resulted in countless ideas to write about for years to come.


Phrase for today: The unbelievable does exist