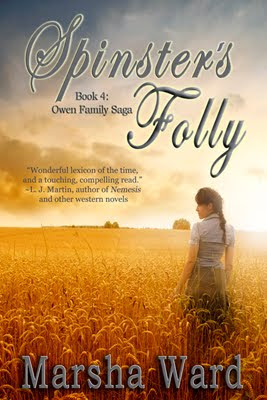 Marie Owen yearns for a loving husband, but Colorado Territory is long on rough characters and short on fitting suitors, so a future of spinsterhood seems more likely than wedded bliss. Her best friend says cowboy Bill Henry is a likely candidate, but Marie knows her class-conscious father would not allow such a pairing. When she challenges her father to find her a suitable husband before she becomes a spinster, he arranges a match with a neighbor's son. Then Marie discovers Tom Morgan would be an unloving, abusive mate and his mother holds a grudge against the Owen family. Marie's mounting despair at the prospect of being trapped in such a dismal marriage drives her into the arms of a sweet-talking predator, landing her in unimaginable dangers. This fourth book in the Owen Family Saga is infused with potent heart and intense grit.

Marsha Ward is an award-winning poet, writer and editor whose published work includes four novels in The Owen Family Saga: The Man from Shenandoah, Ride to Raton, Trail of Storms, and Spinster’s Folly; and over 900 articles, columns, poems and short stories. She also is a workshop presenter and writing teacher.

Here are links to her author pages:
Smashwords
Amazon

I also have the pleasure of having a humors, and informative, guest post by Marsha. Enjoy:

Proofreading is a dying art, wouldn't you say?

Before I was a novelist, I worked in several other branches of the writing industry, including as a freelance content and copy editor, reporter and editor for several different newspapers, and editor of a couple of writers’ magazines. I still freelance on occasion, and retain a healthy regard for correct usage of the English language. In fact, I keep a Curmudgeon in the basement, and occasionally I’ll let him out to rant about that subject.

Some days I get way too much silly pass-along email, but one I got recently seemed to hit the spot for writers. These are supposedly actual headlines. I contemplated letting The Curmudgeon out to address the situation, but thought better of it since I’m so busy. Curtailing his rages takes a lot of energy and muscle.

Judging from these headlines, there is still a need to proofread very carefully! The first person statements below are by that ubiquitous fellow, Anonymous, not The Curmudgeon.

Man Kills Self Before Shooting Wife and Daughter
This one I caught in the SGV Tribune the other day and called the Editorial Room and asked who wrote this. It took two or three readings before the editor realized that what he was reading was impossible!!! They put in a correction the next day. Too funny.

Panda Mating Fails; Veterinarian Takes Over
What a guy!

Juvenile Court to Try Shooting Defendant
See if that works any better than a fair trial!

War Dims Hope for Peace
I can see where it might have that effect!

Cold Wave Linked to Temperatures
Who would have thought!

() Couple Slain; Police Suspect Homicide
They may be on to something!

If Strike Isn't Settled Quickly, It May Last Awhile
Ya think?!

Man Struck By Lightning: Faces Charge
He probably IS the battery charge!

Astronaut Takes Blame for Gas in Spacecraft
That's what he gets for eating those beans!

Kids Make Nutritious Snacks
Do they taste like chicken?

Dropouts Cut in Half
Chainsaw Massacre all over again!

Hospitals are Sued by 7 Foot Doctors
Boy, are they tall!

And the winner is...
Typhoon Rips Through Cemetery; Hundreds Dead
Did I read that right?