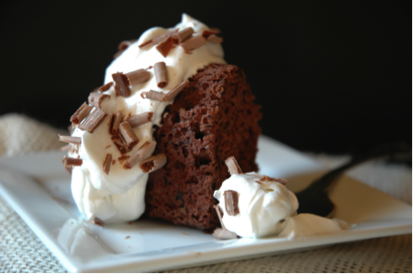 Chocolate Angel Food cake is angelic because it is low in fat. Don't get me wrong, there is a lot of sugar in there, and that whipped cream on top isn't innocent; BUT the whole entire angel food cake only has as much fat as two ounces of milk chocolate.

Place the egg whites and cream of tartar in a metal mixing bowl. Beat until stiff peaks form and the whites are glossy. Add the vanilla and beat well.

In a separate bowl, sift together the flour, powdered sugar, cocoa, baking soda, salt, and shredded chocolate. Fold 1/2 cup of the powdered mixture into the egg whites. Repeat until all the flour mixture is incorporated into the eggs.

Pour batter into a non-stick angel food cake or bunt cake pan. Bake at 350 degrees for 30 -35 minutes or until cake springs back. Run a knife around the edge of the pan and invert the pan onto a funnel or cup and allow to cool for 2 hours. Remove the cake from the pan and serve with fresh whipped cream and chocolate shavings.