Shadows in the Curtain by Cami Checketts 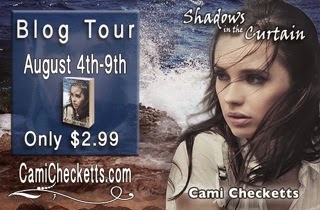 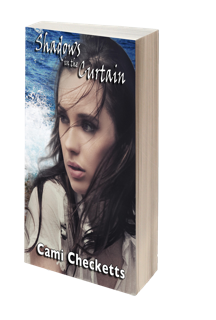 Every stage actress wants fans, but what happens when one goes too far?

Emmy has the perfect life— a house on the beach, a successful career headlining the local theater, and love. But when a brutal murder brings unimaginable grief, Emmy’s world comes crashing down. As she tries to pick up the pieces, she can’t seem to avoid Josh, the new fireman in town.

Emmy does her best to fight the sizzle in her chest when Josh is near. But with the stalker still out there, terrorizing her and those she cares about, she can’t fall for anyone—especially Josh, a suspect in the murder investigation.

If Emmy allows a man to get close, it’s not just her heart she puts at risk, it’s her life.

MY thoughts: Cami Checketts can spin a tale like no other. Love, suspense, thrills, she has it all, and Shadows in the Curtain is no exception. What a thrill ride! I highly recommend this book. 10 stars!!”
Sherry Gammon, author of the Port Fare Series

“I’m a sucker for the exciting parts, and this book has scenes that had my eyes racing my heart to the end of each page!”
Amanda Tru, author of the Yesterday Series

Cami Checketts' books Poison Me and The Colony are only $.99 for the length of the Shadows in the Curtain blog tour - August 4th - 9th.

Poison Me
Jake Merrill was raised by his grandmother, Ruby, and her hilarious friends. After a suspicious death at the retirement home where Ruby lives, she enlists Jake and Chanel, the beautiful activities director, to help her find the killer.
But secrets Ruby has kept for decades threaten her family and the man she’s always loved but could never have. Chanel’s unstable ex-boyfriend, a presumably dead relative, and vicious criminals add to the confusion. Time is running out as Jake, Chanel, and Ruby desperately search for clues to solve the murders and fight to save those they love.

The Colony
To protect her sons from the mistakes of her past, Brinlee Trapper escapes to a secluded mountain home. But there are dangers lurking in the mountains she has never encountered. The little family is saved from injury by Jed, a mysterious hunter. Brinlee is drawn to him, but she worries about his involvement with a peaceful commune hidden deep in the mountains behind her property.
Lance, Brinlee's attentive neighbor, has his own troubled history. Between his obvious attraction to Brinlee and his developing love for her children, Brinlee finds it more than difficult to guard her heart against this tender intrusion.
While Jed offers a life of excitement and freedom, Lance holds the key to the family Brinlee always wanted. When it comes time to choose, she learns that both men have secrets that could shatter her fledgling trust in men and the wrong decision could leave more than her heart exposed to danger.


Excerpt from Shadows in the Curtain

Timothy stuck to her side while people surged passed with compliments, hand squeezes, and the occasional hug. Emmy searched every eye, but only saw excitement from a fun performance or weariness from sitting too long. If anyone had murder in mind, he was as good at putting on a fake face as she was.
No one piqued her curiosity. Until he came. She had no clue what his name was, but the past few weeks she’d seen him almost every morning at the gym. He was much too good-looking, with his rippling muscles and deep blue eyes. She always avoided looking directly at him, though she knew that was as obvious an indicator of her attraction as staring would be. She couldn’t avoid him now.
The wide entryway, which featured plush, faded carpet and wood-planked walls, shrank as he drew nearer. The babble of the crowd faded. He reached for her hand, staring deep into her eyes. Her hand fitted itself into his like he was a magnet. Her entire body leaned toward him.
“You were amazing. So passionate.” He smiled and the room swayed.
Emmy was quite sure the passion she experienced right now had nothing to do with singing or acting. She should draw away but couldn’t force herself to. “Thank you,” she managed, embarrassed by the huskiness of her voice as she tried to catch a breath.
The crowd pressed forward, and he was forced to release her hand and move to the side. His blonde date gushed over Emmy for a second, and then they were gone.
Emmy continued greeting other patrons but couldn’t forget the allure of his blue eyes. He didn’t seem like the creepy stalker type, but she had to wonder. Could he be the one sending the notes?

a Rafflecopter giveaway
Posted by Author Sherry Gammon at 2:00 AM